Fog blanketed the sky in exquisite thickness. A few yards behind the car was barely visible but in the few hours I slept, I knew my town was there; I was sure of that. The radio played hushed whispers of The Lumineers as Salem came into view, excitement rushing through my veins for 2017 Mass Poetry Festival.

What Diamonds Can Do. the collection which you can purchase on Amazon, was heartfelt and hilarious, especially for “On the Blueline”, a poem about age, transportation, and how we interact, with the best line describing how one feels old or seen as such when a stranger offers up their seat, ‘I wanted to slug him’. The poem among others she shared truly tapped into creativity and beauty of the written word and I’m constantly satisfied with her work. As the other poets read their work and did well in their own right, Keyes was by far my favorite. 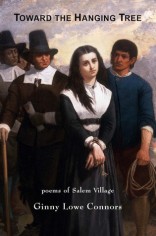 The next event was just a skip away to the Hawthorne Hotel where I met up with Editor Sandy for an intriguing event called “Channeling the Witches: Giving Voice to Historical Figures Through Poetry”. With the festival being in Salem each year, this was a particularly popular event with an appropriate setting. However, we didn’t just get the perspectives portrayed in Salem during the witch trials provided by Ginny Lowe Connors, but also a less shared historical reference to the trials in Scotland, provided by Sherri Bedingfield with a deep discussion on the use of these figures, both presenters had their own spin. For Connors, there was more than enough research materials, using testimonials from Tituba and integrating it into a poem, giving accuracy to the work and providing her potential mindset in a time where the witch flew around crazier than cocaine in the 1980s.  In Toward the Hanging Tree: Poems of Salem Village, one particular poem stuck out. Although the hangman/executioner in 1600’s Salem has never to her knowledge through research been revealed, she created a name, and with it came a poem about his first hanging–Bridget Bishop. Since there is no name for the hangman in historical reference and no one can be really sure, Connors brings to life the nervousness of this man, the sickening feeling as the reluctant victim walks up the ladder to meet her doom. The poem title is “Joseph Leech Does His Duty” and you can access the poem here.

So few people know or learn about witch hysteria origin or at least the hysteria outside famous Salem/Danvers Massachusetts. Bedingfield took a step further by traveling to Scotland a few times, learning about the tragedies that began in Forfarshire. It was refreshing to know someone other than myself has read up on King James and his book Demonology, of how the King of England that bridged two warring countries Scotland and England) saw himself as an expert and ruined the lives of innocent, mentally ill or just plain out of luck people, mostly women. Her book, The Clattering: Voices from Old Forfarshire, Scotland is full of these stories which I highly recommend, especially if you are delving into historical poetry of witches outside of Massachusetts. Unfortunately, none of the poems from the reading are available online, but if you’re interested in the book, you can find it on Amazon. 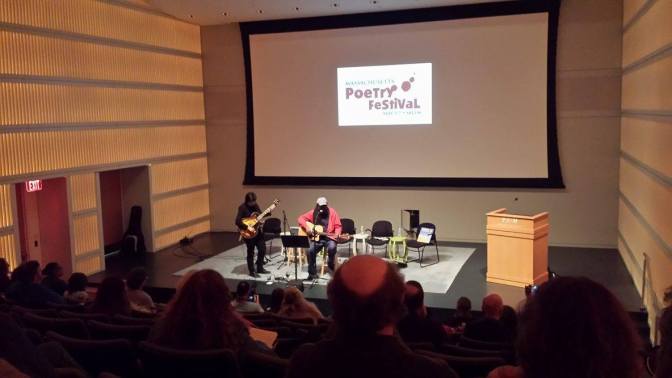 My eyelids hung low, lack of sleep attacking every part of me, so my last event for the day was the “Headline Event: Cornelius Eady and Rough Magic” and it definitely boosted my energy with the mixture of poetry and music. Luckily, there is a video of one of the read poems, “The White Couch”.

Sunday provided better and more forgiving weather for the final day of the festival, and it was apparent in the more livelier energy and turnout. A little bit of sunshine goes a long way. For my first event I was fortunate to attend “Mixed Media: Words, Image, and Music” presented by a former professor, Kevin Carey (SSU). Co-hosting with Mark Hillringhouse and music by R.G. Evans explored creativity that encompassing both poetry in the form of film documentary and integrating music within the production. The film in question, Unburying Malcolm Miller, follows the life of an unknown poet who once roamed the Salem streets, leaving the world in 2014 with over 3,000 poems left behind. An intriguing documentary, works by Miller were shared out loud and one that caught my attention was “A Kind of Education”. The most touching part of the presentation was another former professor, Rod Kessler, who befriended Miller towards the end of his life, had brought this curious person up in class some years before–waving around a handwritten poem and a letter saying, “if you like my poetry send me $5.” It didn’t occur to me this was indeed, Malcolm Miller. Below I’ve included a trailer to the documentary as well as links to the presenters.

Following the reading was an array of songs with Lisa Liu- guitar in their band, Rough Magic. You can visit their Facebook page here. 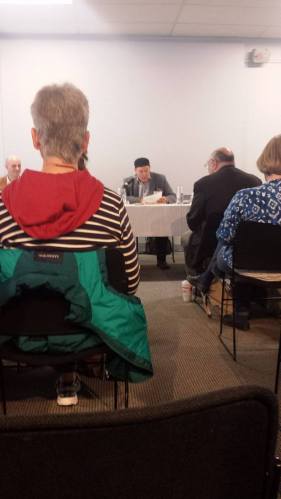 The next event held some deep importance as I attended “Emotionality: Harness or Whip?”, where the question lingered from the panel to the audience if we incorporate restraint through our writing or do we let loose. Moving through published works as well as personal works from the panel, the approach to ‘our relationship with our emotions’ was the main focus as well as personae. The following works were integrated in the panel:

For the final event (and many others attended by my colleagues) I will leave this with Editor Joe who attended the event with me so stay tuned in!