This is not a political post, although it’s certainly appropriate to mention how surprised I was with the election results in November. No matter which side you are on (or neither side), it’s relevant to mention how this all feels like a never ending episode of the Twilight Zone – the ending still up in the air on whether we will triumph or fail or just move in the familiar middle of mediocre nothingness we usually dwell in. Now this also reminds me of a video game I played months ago, one that is still lurking in my mind, even more so now than ever. The game is perfectly titled, Everybody’s Gone To The Rapture. I know what you are thinking – or rather know the many perspectives going around:

If you’ve played the game, then you know #3 is especially true. But again, this isn’t just recent events (because I’ve always been a doomsday person), but how a path can lead to many beginnings and endings, depending on how you look at it. For myself, this time hasn’t defined much, leaving more questions than answers. And that’s why EGTTR feels so relevant because you are left trying to connect dots that are too complex to connect. But before I can even attempt to make a connection, let’s learn a little bit about the game. Sorry, but there are SPOILERS about the game in this post, so do not read on if you intend to play it, and I do recommend the game if you have immense patience.

Picturesque English countryside with a celestial sunrise leads you to a journey of self-exploration after the end of the world as you piece together what happened. Or at least in the small village of Yaughton, in Shropshire, England. Following in five chapters that focus on each character, you are, well, someone or no one in this game. This is a little frustrating–and leaves it up to you really to decide. Are you an outsider trying to view the disaster? Are you the infamous orbs of light that started the whole ordeal? Are you just simply the player looking at post-human Earth? There’s never any explanation and the ending doesn’t define it. Like all doomsday storylines, there’s an event but for this fictional town it’s subtle and only few can understand it (or attempt to), which is American Dr. Katherine Collins (Kate for short) and her Yaughton native husband, Stephen Appleton, who you easily begin to dislike until you realize how crazy Kate is. 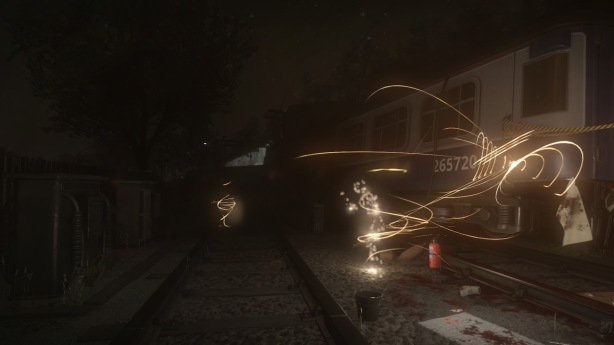 Ok, real quick – I need to get this out of the way now – graphics-wise, the game is uniquely beautiful, the music equally beautiful and haunting, using orbs to actually form into human silhouettes as we peek into the last days of their lives, of the growing suspicions and worry and everything in between a rapture. All of that, amazing.

So what actually happens? An orb of light (also known as ‘the pattern’ which as an ingenious term considering how evolution works in terms of species extinction) that is extraterrestrial or a spiritual entity begins to cause quiet havoc in the town after an event of even more lights in the sky. Of course, any scientist would catch one, which they did (backstory – you don’t see any of this but only figure it out through conversations and left tapes by Kate) leaving a burn on them. In the end, everyone goes missing (with some of the story explaining a sickness going around where the brain just hemorrhages with no success of medical intervention and a failed quarantine attempt), giving this whole rapture idea a run for its money. And how does this happy valley spend their end days? Mostly talking shit about one another with a few isolated moments of depressed realization the town is about to be eliminated (nerve gas to eliminate the infected who have to this point, survived). Then you are left with only two people left in the valley. Appleton and Collins.

One has to question if your life paralleled either of them which character would you be? Is that all we are today, one or the other? This is the moment where my option seems to be crap and crappier because as Collin embraced the pattern to the very end, Appleton bitterly committed suicide in the thought that life after death in the light of the orbs was not where he wanted to be. That’s also if there is an afterlife – in the many suggestions in online forums, the people became orbs or Collins herself was an alien. Yeah, that’s where things are a little weird but the ending just makes it even worse.

After Appleton’s death, (Collins cares little for since he’s sleeping with his old girlfriend who manages to get prego), she either has a complete mental break or a realization. From her perspective the damage the pattern caused was horrific yet necessary as in all the chaos, now everyone is together in this absurd afterlife – even her cheating husband with his side chick. For Collins, the pattern is her other, which of course makes the theories of her being an alien somewhat likely but I’m not completely sold on it because she is grieving for her ending marriage and may be thinking more emotionally than logically, even if she appears to be a highly skilled scientist.

Post gameplay is hard to swallow. You spend so much time visiting these abandoned places with the orb following you in order to force backstories that in the end everyone just dying is a mood killer. But also, so many things were not addressed, which is equally frustrating. What we never figure out and can only theorize on is:

Though these unanswered questions don’t have a definitive explanation, a lot can be taken by how the player thinks and feels. I felt that I was just simply a player observing the last events of the world – not an outside, not an orb of light. Considering the themes and title, I think it’s more possible the light is Godly, not extraterrestrial, despite the two of the main characters being scientists. The numbers are more tricky, and I don’t have a distinct answer, though this seems to be the most popular theory (in which I really would have never come up with):

Sure, let’s go with that.

And of course the ending. Kate just straight up gets sucked up by the light with the delusional thought that it’s what’s to happen and the pattern is her other half. I question whether she would be so accepting if:

This is not to suggest that just because her marriage isn’t working out that she’s gone off the rails – but how it plays it, it sure seems that way.

So what the hell does this have to do with anything? Whether you think current events is a literal feeling of rapture, these two items do force the question of self-preservation, purpose, how we connect to each other and how we often make attempts to connect in bad situations, of how we reject events or embrace them, or they bring us together or separate us. The entire town pre-event have their pockets of friends but the game really focuses on the problems and how they are resolved because of how the event is unfolding. Some people make peace with each other or peace with their fate as others are almost ignorant to the fact of an end. Well, at least until the nerve gas gets them, though we never really know how that turns out, other than Appleton burying himself in a bunker to die, confident everyone is dead.

I hate to leave this post like the game – almost unanswered, but that is a product of life. Not knowing but working towards something with effort. What kind of person will you be at the end of the world? Or perhaps the end of an administration? In the beginning of something new? Can an event change you? Can you adapt, like the light and do something different? Work towards happiness? Work towards connecting with others before an event?