We had the pleasure to speak in our exclusive interview with artist and graphic designer extraordinaire Christoph Frei. Christoph resides in Switzerland and his highly creative work can be found at http://www.chky.ch.

BOM: How did you begin this journey to creating art & graphic design? Was this your intended path all along?

CHRISTOPH: I always liked to draw, but realized rather late that I could make a living out of this. I entered college thinking I’d study medicine or geology. In a clear moment near the end of college, it finally occurred to me that it would make sense to pursue something I actually was good at and liked. So I went to art school and studied graphic design, fitting illustrations into my assignments whenever I could. I became a sort of graphic design/illustration hybrid guy which, as I found out, was quite a good niche.
During my studies I started working on freelance projects here and there which earned me just enough to get by. After graduation, I decided I’d go on like this as long as I could and then get a “proper” job in an agency.  But that moment luckily never came, so at some point, I realized I had built up a little graphic design/illustration bureau without consciously intending to. That was 12 years ago, and I’m incredibly grateful for being able to work like this. It still feels a bit like being a student. 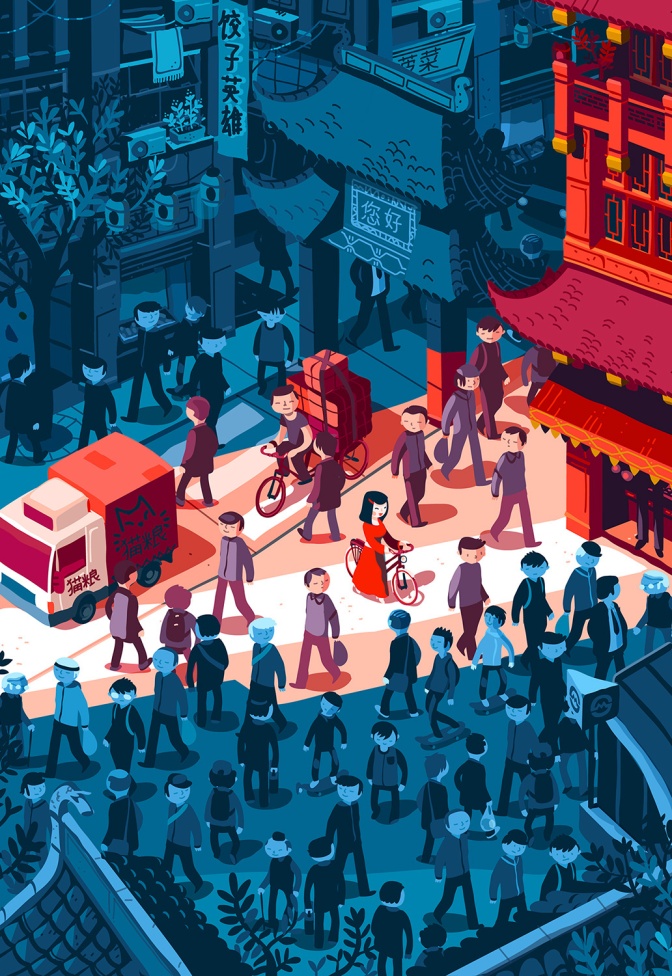 BOM: Your graphic designs are so unique–connecting people with their surroundings, whether with nature like ‘The Hideout Poster’ or ‘A Late Chinese Afternoon’. Where do you get your inspiration for these works?

CHRISTOPH: Both of these have been largely inspired by light situations and the colors that they produce. In ‘A Late Chinese Afternoon’ the briefing was to highlight a woman in a crowd of men, so I tried to use sunlight and shadow to point to the main character. ‘The Hideout Posters’ are a personal project.  Basically, I just wanted to draw a place where it would be cool to hide away and relax for a bit, equipped with all the things that go along with it. Shelter, a place to sleep, an oven, a good book and a dram of whiskey. Light plays a big role here, too: it builds the whole atmosphere for maximum coziness. 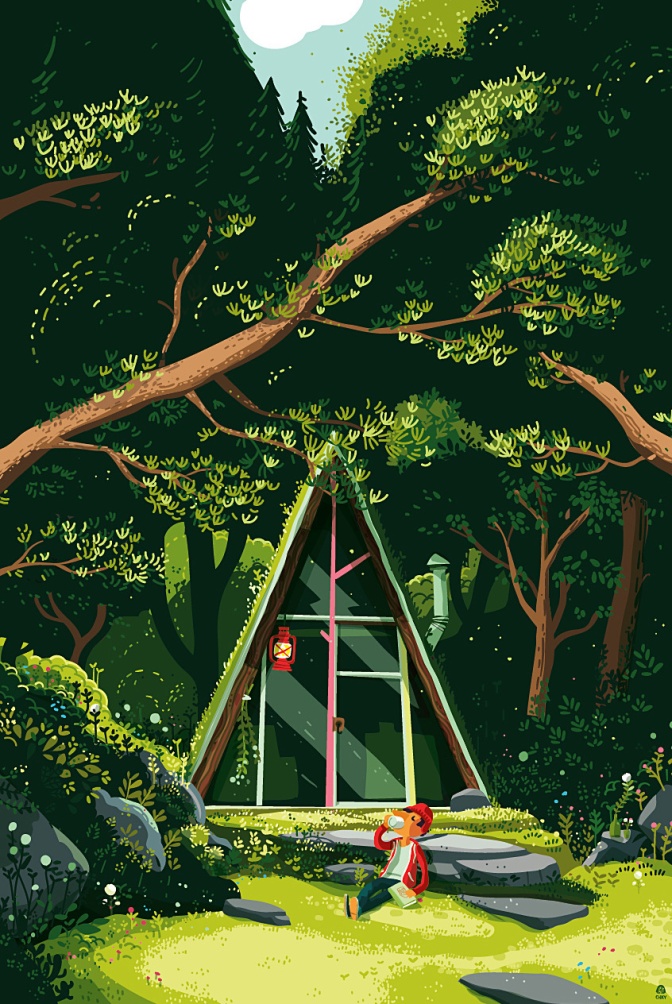 BOM: Take us through the process of idea to finished product–what are the steps? The difficulties that occur? How long does one piece take?

CHRISTOPH: First of all, I try to find out if a client has a sense of humour. Knowing the answer to that makes finding ideas and the right style much, much easier for me. Ideas then usually pop up quite quickly, sometimes already in the briefing. Where exactly they come from still beats me. 🙂

But of course, I collect things that inspire me: color schemes, light situations, pieces by other designers that I like, styles I’d like to experiment with. I try to pair that with the clients’ needs and develop one or more style directions/sketches which I present  to them. When I get the green light, I usually start out with a tiny pencil sketch, then straight into Adobe Illustrator where I draw the real thing. I like the flexibility of vector graphics where you can easily change, recolor or rearrange things. Then there’s usually an adaption round where I include the client’s feedback before getting the artwork ready for print or screen. How much time it takes is mostly determined by the deadlines, and I’m really glad for that. I fiddle on forever without a deadline. So an illustration can take between a few hours and a week depending on the complexity and the time available. The biggest difficulty to me really is staying focused. The fact that I work on a computer which is also a communication and entertainment machine doesn’t make things easier. Listening to audiobooks or The Ramones usually helps.

BOM: Do you use any software? If so, which ones?

CHRISTOPH: I’m an Adobe Illustrator man; I use it for almost everything. Apart from that, some Photoshop and After Effects, for animations.

BOM: How has your art style changed since you started putting pieces online?

CHRISTOPH: I don’t think the fact of having an online presence has changed anything in my style. But I, of course, get influenced and inspired by all the amazing artists you come across on the web.

BOM: It appears you’ve done plenty of commercial work. What’s been your favorite project you have worked on and why? Are there certain projects you prefer to take on?

CHRISTOPH: I like jobs that allow you to tell a little story, or let you sneak in some side jokes or easter eggs. From that point of view, this dictionary illustration project is easily my favourite.

BOM: This may be a challenge, but which piece is your favorite of all time?

CHRISTOPH: A tough one indeed, they’re all my babies 🙂

I’m quite fond of this guitar guy. It was a very spontaneous idea for a flyer and quickly done, but I think it turned out rather well.

BOM: What advice would you give beginner artists and graphic designers that you wished you had when you first started?

CHRISTOPH: One thing I learned in my first internship (during art school holidays) is that, in reality, most jobs don’t allow the creative freedom you have in your education. Many of my highbrow creative concepts were thwarted in favor of more pragmatic designs (for good reasons probably). Back in art school, again, I decided I’d try to have as much fun as possible with the assignments we were given. Looking back, this resulted in much more interesting and weird stuff.

So: Go wild while you can! Compromise is for later.

And: Master the software!

Also: Office printers have a sensitive soul. But you probably knew that.

CHRISTOPH: I’m working on my own picture book! But it’s still a long way to go. I’ll let you know. 🙂

CHRISTOPH: You can find my work mainly on my website and Behance but there’s a Tumblr too.